This is one of the beautiful close-up pictures I have taken three years ago. This Himalayan Poppy is endemic to the alpine areas of Nepal Himalayas. The picture in inset is closeup view of a single flower of the poppy. The photo was taken in Gosaikund area of Langtang National Park, Central Nepal at an altitude of 4100m from mean sea level on 11 July 2008.
The white drops on different parts including long golden hairs is dew. I captured this photo early in the morning on rainy season. We can find this plant on steep slopes of alpine grassland most frequently on rock crevices. This herb reach on it's peak flowering on July.
Primula spp., Veronica himalaica, Rheum australe, R. acuminata, Bistorta spp., Juncus thomsonii etc are some of the associated species.

#2. The National Flower of Nepal
Rhododendron arboreum, the National flower of Nepal is a medium - small sized tree distributed in the lap of the Himalayas generally from above 2000 m asl up to 3000 (even higher in some regions) forming a forest belt in an association with Lyonia ovalifolia, Tsuga dumosa, Pinus wallichiana etc. The color of the flower varies from Red to White and reach on peak flowering in March-April. This is being used as a excellent source of fuel wood in mountains leading to quick destruction of Rhododendron forest.

#3. Rhododendron anthopogan
One of the high-altitude species of Rhododendron, R. anthopogon: locally called Sunpati, is a shrub species forming a distinct vegetation belt generally above 4000m up to 4700m asl in Northern aspects of the Himalayas. Because of its fragrant leaves it is being used by the local inhabitants as one of the principal natural incenses in different cultural/religious rituals. Any incense considered to be the best if R. anthopogon and Juniperus spp. (Junipers) are major constituents. Moreover the petals (transparent yellowish part in this photo), because of their medicinal property, are highly used in traditional medical practice including Tibetan Medicine by Amchies. People from Langtang region use those petals as an ingredient in tea to prevent many diseases like common cold, fever etc. It is also equally important in terms of ecology as it provides excellent habitat for many delicate herbs to cope with various biotic as well abiotic stresses.

#3. Maharanga bicolor
The species epithet remains “bicolor” because of the occurrence of two different colored flowers in a same inflorescence axis (see the photo). This - a plant with unique flower - is a medicinal herb found in moist areas of temperate region. There is also another species of Maharanga (M. emodi) which looks similar to this but occurs in relatively higher altitudes. The shape and size of flower also differs along with color. I’ll also post that species not so distantly.
I took this photo in Langtang region on the way to Deurali (around 2 hours walk from Dhunch-the park head quarter) during Expedition langtang’08 on 10th July, 2008. 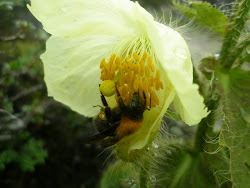